Jacobean embroidery is a style of embroidery design, rather than an embroidery technique, and has its foundations in crewelwork which is one of the earliest forms of surface stitching which is worked specifically in wool. Though Jacobean designs were sometimes worked in wool, they were also worked in silk and even included metal threads. These days  designs are worked in a variety of fibres, often combined to produce interesting effects. 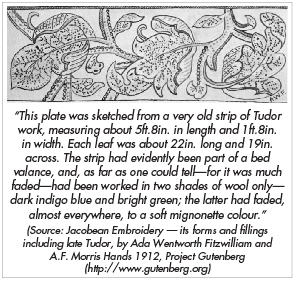 Jacobean-style designs, developed in the 17th century, were influenced by exotic flora and fauna found on imported Indian chintzes brought back to Europe by the newly formed East India Company. The style includes elaborate stylized flowers, vines, plants, animals, and birds. The name “Jacobean” comes from James I of England, under whose reign this style of décor became popular.

The interlacing stems of the work of the 14th century became grafted on to the traditional Tree of Life foliage in the Oriental designs, and English embroiderers had a predilection for adding insects and quirky animals. In numerous Chinese patterns one sees the main motif springing out of a base of waves formed exactly like the hillocks which became such a distinctive feature in these large branching designs.

Colouring has varied over the years very much in response to the social requirements of the day. For example, the riotous re-action from the Puritan rule in 16th and 17th Century Britain was reflected in the embroideries of the Restoration, in which patterns became exuberant, and colouring more brilliant. Similar social influences were seen in the designs worked, and they ranged from large areas with solid fillings to lighter, more graceful designs where ‘grotesques’ were eliminated and back again to ‘heavier’ images. 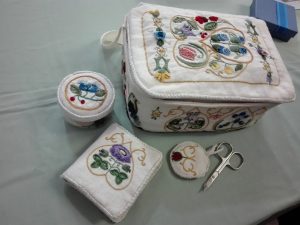 In the modern era we are much less strictly influenced by traditional forms and colours. Some embroiderers stick to the classic, while others allow their exuberance free rein with sweeping curves and brilliant colours.

The books we have in the Guild library are a magnificent resource and are packed with ideas and information. The library is open every second and fourth Tuesday, and at both of the Saturday meetings.

Another surprising source is Project Gutenberg, an online archive of books which was started in 1971. Most of the items in its collection are the full texts of public domain books, and are in open formats that can be used on almost any computer (see above).

We are moving into assembly phase of this project. If you’ve handed your project to someone other than Jenni, please check and make sure it has been passed on. We would hate for your submission to be missed because it fell through communication cracks.