Whitework is a modern term for most embroidery on white fabric worked with a white thread. Pulled thread embroidery, also known as drawn fabric, is a form of whitework that does not involve cutting the fabric threads, and no threads are removed. This differentiates it from cutwork and drawn work. Instead, tension is used when working the stitches to draw the fabric threads together to produce a lacy effect. 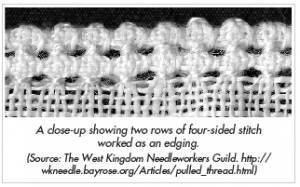 Historic forms from Persia and the eastern Mediterranean region appeared well before the 1700s, but the best and finest work was said to come from Dresden (Dresden Work). In German it is called “Ajour Arbeit”, “Ajourstickerei”, or “Perser Ajour Arbeit”. The Danish call it Tondern work, and the French refer to it as “broderie ajourée”  or “jours a fils tire”.

In the 1700s pulled work was commonly used for fichus, aprons and sleeve falls.  The early forms were fantastic floral designs with motifs outlined either in some surface stitch or with double back stitch.

The technique is also used to create a background for other embroidery.

Pulled thread embroidery is worked on a loosely woven evenweave fabric (a single weave fabric, not something like Hardanger cloth or Aida cloth). The threads are literally pulled out of alignment and bound into groups to create patterns of holes. The focus of the work is the pattern created by the holes, rather than the actual stitches sewn.

That said, each specific stitch must be worked in a specific way on the front and back because the thread paths on the back side of the cloth help to compact the fabric threads in a certain way. This results in each stitch producing its own characteristic kind of hole. The thread path on the back is as important as the thread path on the front in creating this characteristic hole pattern. There are dozens of different stitches used in this form of hand embroidery, and most are standard stitches used in surface embroidery, which create their own magic when pulled tightly in geometric precision.

The Guild has several books in the library focusing on this technique, and the internet is also a useful source of patterns, samples and hints.

The Witwatersrand Embroiderers’ Guild will be holding its inaugural Market this Saturday at the Trinity Methodist Church, 5thAvenue, Linden. There will be a display of the Covid Frieze, which Jenni Langford has put together magnificently, as well as other displays of work.

There will also be plenty of items for sale, if you’re looking for that unique Christmas present: stash-busting stalls, jewellery, soap and bath goodies, baking kits, bric a brac, Christmas goodies, smocking and cross stitch. Helen Bird is selling her books of poetry and we have pancakes, hot dogs, tea and biscuits as well as cooldrinks on sale.